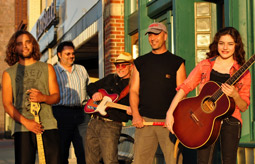 LAKE VIEW, IOWA _ The lineup for the eighth annual Stone Pier Summer Concert Series is set and it promises to be another season of memorable performances for audiences attending on both land and Black Hawk Lake. The Series will offer four free shows this year on the historic Stone Pier stage, pairing a storied setting with renowned acts from around the country. Representing a range of genres, including indie pop, funk/soul, alternative rock, Americana and country, the lineup is sure to appeal to all ages and have crowds dancing and enjoying beautiful summer evenings on Black Hawk Lake.

The Series will begin on Saturday, June 2, featuring indie pop artist Jocelyn from Omaha, Neb. At an astounding twenty years of age, Jocelyn combines her observant and mature outlook on life, love and music to write amazing, memorable songs that stick in your head. Her music and riveting live performances have the ability to capture an audience in a way that very few can and she recently wowed Darius Rucker with her talent on an episode of Undercover Boss. Jocelyn signed a major label contract with BMG this past January and is currently working on material for her debut album. Her original single, “Just Like Everybody Else,_ has well over 1 million spins on Spotify and her YouTube channel showcasing covers continues to be popular with thousands of fans.

Ryne Doughty will open the June 2 show starting at 6 p.m., following the 10th Annual Sip & Sample event being held on Main Street in Lake View. Doughty is a roots-Americana musician out of Des Moines, Iowa, whose music is deeply rooted in real life stories. His stripped down, earthy sound is directly influenced by the small, rural town where he was born and raised. With solid finger-style guitar picking and a rich baritone voice, he is certain to draw the audience into every heartfelt song.

The July 7 show pairs two alternative rock powerhouses for a can’t-miss performance on the Stone Pier stage. The Brevet, a four-piece band from Southern California, will make a stop in Lake View on their extensive Locked and Loaded 2018 North American Tour. While fans and critics have labeled them as one of the first in the ‘Epic Americana_ genre, they combine elements of folk, country and alternative rock in a way that has drawn comparisons to Kings of Leon, NEEDTOBREATHE, and even Mumford & Sons and the Lumineers. While The Brevet may not yet be a household name, many may recognize their songs from TV shows like 90210, Growing Up Fisher and American Idol, films like The Good Lie and Ashby, and most recently a placement with Apple.

The Roosevelts will kick things off on July 7 at 5 p.m. Formed in Austin, Texas, and currently residing in Nashville, Tenn., The Roosevelts are a live band if there ever was one. Their show provides a rousing dance-worthy compilation of songs and combined with the band’s charismatic ability to connect with fans, concert-goers can’t help but smile. After releasing their debut album in 2016, they went on tour with acts like Johnnyswim, Robert Earl Keen and Grace Potter, and played stages at festivals including South by Southwest (SXSW) and Austin City Limits. Following a 50-date headlining tour in 2017 all over the United States, the band is in the studio working on an album to bring new music to eager audiences in 2018.

The Series is excited to welcome Kris Lager and his eclectic, high energy show to the Stone Pier stage on Aug. 4. Based out of Omaha, Neb., the Kris Lager Band (KLB) has been traveling the country for over 15 years spreading their brand of ‘Feel Good Funk & Heavy Soul._ Describing their show as ‘a legitimate Rock ‘n_ Roll Revival and an Electric Church,_ crowds should be prepared to dance, stomp and sing along to contagious and impossible to sit still through grooves. This spring, KLB will release an album called “Love Songs & Life Lines_ mixed by Grammy Award Winning Producer, Jim Gaines (Santana, Van Morrison, Steve Miller), which is sure to be full of material that brings even more joy to Kris Lager listeners.

The Lost Tracks will open the August 4 concert beginning at 5 p.m. This group is a mix of Iowa musicians who united a few years ago with the intent of blending their unique backgrounds to create original music with a signature sound. Always leaning toward pure rock and roll, the band also channels ‘Waylon-esque_ country, occasional jazz tones and an Americana feel. After investing a lot of time in the studio developing tracks, they are excited to connect with audiences during a slate of live shows this summer.

The final show of the season on Sunday, Sept. 2 begins at 5 p.m., following the community’s 4th Annual Ronald’s Road Rally fundraiser bike ride, and brings together another dynamic duo. Alex Williams and Jaime Wyatt both landed on Rolling Stone’s “10 New Country Artists You Need to Know_ list in 2017 and are legitimate rising stars on the country music scene.

Williams, a 26-year-old native of Pendleton, Ind., has a style that will delight fans of classic country baritones like Cody Jinks and Chris Stapleton. Williams released his debut album, “Better Than Myself,_ last August on Big Machine Records and the 12-song collection blends his unique take on traditional, honky-tonk country with Southern rock. Following the album’s true-to-form vision, Williams_ live show is a force to be reckoned with that has earned him dates with everyone from Lynyrd Skynyrd to Hank Williams, Jr.

Wyatt is a striking figure with an old soul and a voice like a force of nature. Regardless of genre, the Los Angeles-based musician is a dynamic performer who sails naturally between vintage ‘60s and ‘70s country/rock ‘n_ soul anthems and heartfelt country ballads of love and corruption. Country radio station 95.3 The Bear recently named her, alongside Sturgill Simpson and Margo Price, as “one of the country artists you may not have heard of, but need to hear._ She’s opening a string of dates for Shooter Jennings this spring as part of an extensive 2018 tour.

There is no admission charge or ticket required to attend the live shows, thanks to the support of many generous sponsors. While concertgoers are allowed to bring food and beverages to the picnic-style performances, food is available for sale at each show with all proceeds directly benefitting the Concert Series. The popular “Burger Boat_ will continue being operated by the Lake View Fire Department to deliver food to fans attending by boat on Black Hawk Lake.

More information can be found at stonepierconcertseries.com or on Facebook at Facebook.com/StonePierSummerConcertSeries. The complete 2018 schedule follows:

The series is made possible by a host of sponsors who help keep the concerts free to the public. More information can be found by visiting the Lake View website (LakeViewLifestyle.com) or on the Concert Series’ Facebook page (facebook.com/StonePierSummerConcertSeries).

All shows begin at 6pm and run until dusk. Listeners are encouraged to bring blankets or camp chairs for seating in the natural outdoor amphitheatre setting. For more information, find the Stone Pier Summer Concert Series on Facebook or visit lakeviewlifestyle.com.