The Chief Black Hawk statue is a Depression-era project of the Works Progress Administration Arts Program under the direction of Grant Wood. Conceived by Dr. E.E. Speaker, the statue was a joint venture of the Lake View Commercial Club and the fine arts school of the University of Iowa at Iowa City. Graham M. Dean, a former Lake View resident and the managing editor of the Iowa Press Citizen, was instrumental in presenting a proposal to the fine arts school at the university. His efforts resulted in securing the services of a young sculptor at the university, Harry E. Stinson, who was afforded the task of creating the statue. 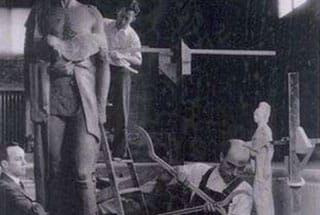 Chosen as the site for the statue was the north entrance of Crescent Park. Early in 1934, plaster molds for the statue were delivered to Lake View. The statue was cast at its site by the Art Stone Company of Sioux City, Iowa, on June 17, 1934. It stands nine feet in height and stands on a pedestal that extends the overall height to eleven feet. The statue is composed of Atlas White, pulverized buff stone and Platte River sand. The molds were removed June 29 and for the first time Black Hawk cast his stone eyes over scenic Black Hawk Lake. As the molds were removed, the statue was rubbed with carborundum in order to provide a smooth exterior surface.

Chief Black Hawk, a Sauk war chief, represented preservation. He believed the land to be a sacred trust to not be desecrated. He was willing to go to war and to give up his life if necessary to preserve the waters and the land that he believed to rightfully belong to him and his tribe. Since Sac County is named for his tribe (Sac being a variant spelling of “Sauk”) and the lake bears his name, this statue on the shore of the lake became a fitting tribute. It stands not only as a monument to him, but also as a reminder to all who share his beliefs that the land and water are worth preserving. 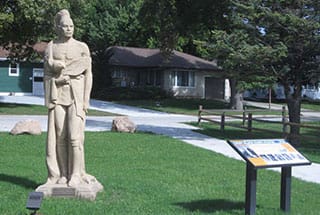 Chief Black Hawk headed the Sauk tribe which roamed this area of Iowa. His full name was Black Sparrow Hawk but somewhere it was shortened. He took over as medicine man when his father died and kept the items for that “job” in a pouch made from the sparrow’s skin. He became chief of the Sauk tribe and was the most famous Indian chief in our area of the United States. It is highly improbable that Chief Black Hawk himself was ever in Sac County, but his tribes likely camped on the shores of Black Hawk Lake and fished its waters.

The statue represents Chief Black Hawk as a hunter and warrior more than a political leader of his tribe. The hawk on his right arm is symbolic of his name and is linked with his custom of carrying a medicine bag made of hawk’s skin. In his left hand he is holding a bow, representing his prowess as a hunter and warrior. The bison skull behind his left foot is indicative of the wild life of the prairies. He is dressed in warrior fashion. The crest on his head is distinctive of the Sac and Fox tribes.

Chief Black Hawk earned fame in 1832 when he led his people from the Iowa Territory back to Illinois as they were pursued by federal troops and defeated at the Battle of Bad AX in Wisconsin where he was captured in 1833. He died in 1838 at Fort Atkinson, Iowa.

The chief stands near what once was the north shore of Black Hawk Lake. In later years that shoreline disappeared when the lake was dredged and the spoil was placed in front of the statue and created what became known as Camp Crescent beach and campground. The previous shoreline is marked by the boulder a few feet in front of the statue. 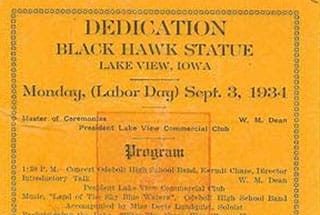 The statue was dedicated at a Labor Day celebration on September 3, 1934. This ceremony also included officially renaming Wall Lake as Black Hawk Lake. Mr. Stinson was among the many dignitaries who spoke that day. The Tama Indians were part of the dedication presenting a program of ancient tribal dances. Another interesting feature of the dedication celebration was a marriage ceremony uniting local residents Merlin Finders and Ruth Swanson, a privilege they had been granted through application to the dedication committee. Among others, the wedding party included twelve bridesmaids. The Finders remained as longtime residents of the community.

The presence of the statue and naming of the lake led to choosing the Blackhawks as the mascot for the local school sports teams. Later when girls’ teams came in fashion, they were known as the Hawkettes. For many years, homecoming celebrations at the high school included a bonfire near the Chief Black Hawk statue. The statue has also been the site for hundreds of photo opportunities over the years.

In 2001 the Lake View Historic Preservation Commission nominated the Chief Black Hawk statue for inclusion on the National Register of Historic Places. A small plaque designating the statue’s placement on the register rests at the base of the structure.

A rededication ceremony honoring the Chief Black Hawk statue and the newly designed plaza surrounding the statue was held on Labor Day, September 5, 2016. The area was made handicap accessible with new sidewalks and provided parking spaces for easy access to the plaza.