The last of the five glacial invasions covered the eastern half of Sac County. When the ice melted, the floodwaters settled in a basin forming what is now Black Hawk Lake, the southernmost glacial lake in the United States. A natural spring-fed lake surrounded by rock boulders, this 957-acre recreational area is maintained and treasured by the community.

Settlers came to the area and a few resided on the south and east sides of the lake in 1867. Later it was because of the beautiful lake that two enterprising men, Platt Armstrong and James Fletcher, decided this was a good place to build a town. A railway station and sidetrack were built with the permission of the Northwestern Railway Company. In 1880, the town was laid out and it became Fletcher. Seven years later the name changed to Lake View.

The lake progressed through four name changes from Boyer Lake to Walled Lake and from Wall Lake to the present name, Black Hawk Lake. Development of the lake as a resort area happened as early as 1890. Ballparks, amusement parks, hotels and cottage rentals flourished at the East End and Lakewood areas. 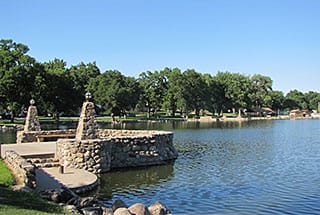 The Stone Piers are the main structures and focal points of a three-acre municipal shoreline park developed in 1934-35 under the Civilian Conservation Corps (C.C.C.) program. The Stone Piers were listed on the National Register of Historic Places in 1991 and were refurbished in 1999 under the guidance of the Lake View Historic Preservation Commission (HPC).

The West Pier, built near the site of a nineteenth-century steamer landing, extends about 34 feet into the water. Its design is a stylized U-shape with two obelisk-like electric light posts near the short entrance.

The North Pier extends approximately 82 feet into the water as measured from its farthest point north, which is a curved masonry bench. A finger pier extends from the ring of benches. At the end, a tapered electric light post rises from a cylindrical base.

Built in 1996, the Lake View Historical Museum offers a glimpse of Lake View’s history. One unique display in the museum is a collection of 130 species of birds which have been stuffed and mounted. The Dr. Mark A. Durst train display is also a highlight in the museum, featuring a miniature Lake View, Black Hawk Lake and Danbury. Two floors of displays house treasures of Lake View’s past. 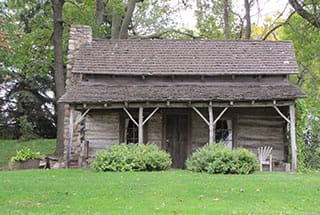 This Historic Log Cabin on the museum grounds was built in approximately 1870 by the Belt Family east of Lake View and moved to its present location in 1926. Recently, the one-room cabin was restored and it is now open to the public when the museum is open. It is the site for an annual sledding party in February, Kids Pioneer Days in August, and frequent Coffee at the Cabin events.

A replica of a one-room school house, built to one-eighth scale, is also located on the museum grounds. It was moved to its present location and is now also open to visitors. The structure was built as a play school for Anna Westrom Pitts. Later, Anna became a teacher and her school is now enjoyed by all. Children will often find a teacher in residence and she’s been known to make visiting students stand in the corner! 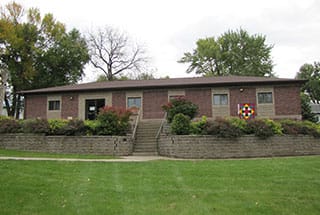 The Lake View Historical Museum is located at 114 Crescent Park Drive and is open Saturday from Memorial Day through Labor Day from 9-11 a.m.

Enroll in Frontdesk to Access All Available Online Services

Questions about Lake View? Click here to view our FAQs