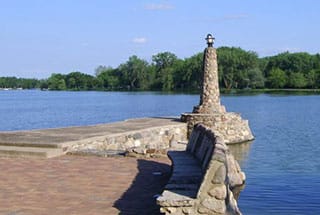 During a drought in 1995 it was discovered that due to the action of water caused by springs which feed the lake, deterioration of mortar had occurred, causing stones in  the bases to shift. Robert Britson, engineer with Shuck-Britson, Inc. of Des Moines, IA, studied the problem. Woodruff Construction of Fort Dodge, IA, got the bid for the work with Paul Henry of Paul Henry Masonry, Rockwell City, IA, hired to apply the mortar and stones. Cofferdams were built so water around the piers could be drained in July of 1999.

The Lake View Historic Preservation Commission was charged with raising monies. Grants were received from Resource Enhancement and Protection (REAP), Revitalization Assistance to Community Improvement (RACI), and Historical Resource Development Program (HRDP). In addition fund drives, donations and monies from the City of Lake View paid for the $197,000 project.

The rotting wooden benches on the west stone pier were replaced in June of 2018 by new benches hand milled by local woodworker, Kenny Grissom. The benches, weighing approximately 500 pounds each, are made from salvaged native maple.