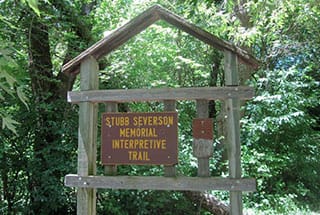 The Iowa Conservation Commission began building a nature trail through the Black Hawk Wildlife area in 1981.   A bulldozer was brought in to blaze the trail, creating pathways for hikers.  Points of interest were numbered with the trail beginning at the Witches Tower.  Park Ranger Dean Hall announced in 1983 that the trail was ready hikers.   In 1984 the trail was dedicated as the “Stubb Severson Memorial Interpretive Trail”, named after Bernard “Stubb” Severson, an Iowa conservation commission supervisor and Lake View resident who died in 1981.