The Witches Tower was constructed sometime between 1933 and 1935 by the Civilian Conservation Corps, Camp SP-8, Company 1776, a veteran’s camp.  The hexagonal shelter was placed on the highest hill of the area, named Gobbler’s Knob by the veteran’s camp workers.  It overlooked part of the 85 acres of land acquired by the State Fish and Game Dept. in 1930 from the C. & N.W. Railroad Co. and the Northwestern Gravel Co. 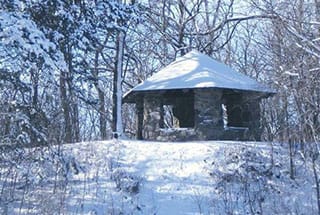 The lookout tower is constructed of stone and mortar.  It has a flagstone floor and the roof is made with log rafters.  Because of its shape there are two doorways and four windows to provide a panoramic view.  In later years the tower became known as the Witches Tower.  We can only speculate on when and why, but some believe it got the name after the heavy growth of trees and shrubs made it look sinister.

In conjunction with the lookout tower, the camp workers deepened, shaped and diked the abandoned gravel pits into 25 ponds, connecting them with paths and walkways.  A state fish hatchery was established and the ponds were stocked with several varieties of fish.  The fish raised here were used to stock Black Hawk Lake and other lakes too.  The hatchery was later abandoned in 1959.

In 1990 the tower and the wildlife preserve area was included as part of “The Black Hawk State Park District Wildlife Preserve and Structures Constructed in 1933 – 1935” and placed on the National Register of Historic Places.